About a dozen years ago, my brother, a recent father and young husband, was struggling to help his willful two-year-old daughter climb the steps to a playground ladder. His daughter, Kylie, had the ability to move up one rung at a time, but kept putting her knees against the next rung, which prevented her from going any higher. She grew increasingly frustrated, and so did he.

After several attempts to correct her form, he told her, exasperated, "Kylie, if you are going to get to where you want to go, you have to take the right steps."

My brother and I have reflected on this story repeatedly. At the time, both of us had decided we did not want to get our doctoral degrees. Instead, we wanted to teach full time with just our masters. However, neither of us were getting the job offers we wanted. That day at the playground, my brother realized that he was asking his daughter to take the right steps to move upward, but he was not willing to do the same in his own life. This prompted him to change directions, stop pursuing limited job opportunities, and apply to a PhD program. A short time later, he entered a prestigious program at Penn State, completed his doctorate, and over time, became a tenured professor—the position he had always wanted. Like his daughter, he learned that he needed to take the right steps in order to get where he wanted. 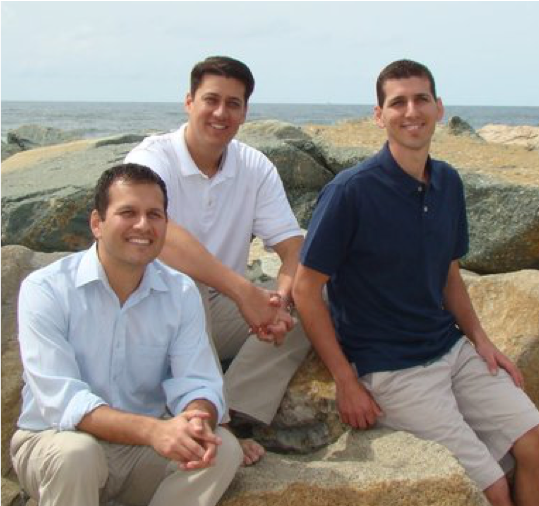 I have two brothers. My PhD brother is in the dark blue shirt. My rich brother is seated behind me. I'm the one that doesn't know where the camera is located.

The right steps has become a metaphor for my brother and me when we are working hard at something, but not getting results. In times like these, it is important to recognize that it is not our effort causing our failure; rather, we may not be following the right principles to get us to our desired destination. This fundamental concept can be applied to dieting, exercise, life goals, and, not surprisingly, to language learning. You may have heard the idea that language learning is only learned through immersion. Yes, that is a true step in the right direction. However, in today's modern world, what if I told you that immersion is no longer a location, but a frame of mind! In other words, learning a language can and does happen in your own country without visiting another (and more often than you might think). It happens in the development of an ecosystem—a language ecosystem.

What if I told you that immersion is no longer a location, but a frame of mind?

As a language instructor for more than 20 years, I have watched thousands of people succeed at learning a language, and to be honest, I have watched many more thousands fail. I have seen entire programs designed well because they were based on ecosystem principles, and I have witnessed entire programs—even entire countries!—use the wrong principles and get the wrong results (for some insight into my work with language policymakers at the national scale, check out Chapter 7: National Plans, in my book The Language Learner Guidebook).

So, how do you build an ecosystem? Glad you asked. To begin, in the course and book, we will introduce you to five fundamental principles, five questions you need to ask yourself, and several "to do's" and "to don'ts." In addition, feel free to explore our website and find out ways to develop your own language ecosystem with our randomizer or the language map. Each can help teach you how to put one foot in front of the other to begin exploring and building. Need a community to give you encouragement and resources? We have a Facebook group, Instagram, and Twitter, as well as Warrior Wednesdays (a newsletter with ideas from Language Warriors all over the world). With your effort and our direction, you will soon be climbing up the ladder of success.

See you in our playground.

Enter your email below to receive our Warrior Wednesday newsletter with language learning tips, promotions and announcements!